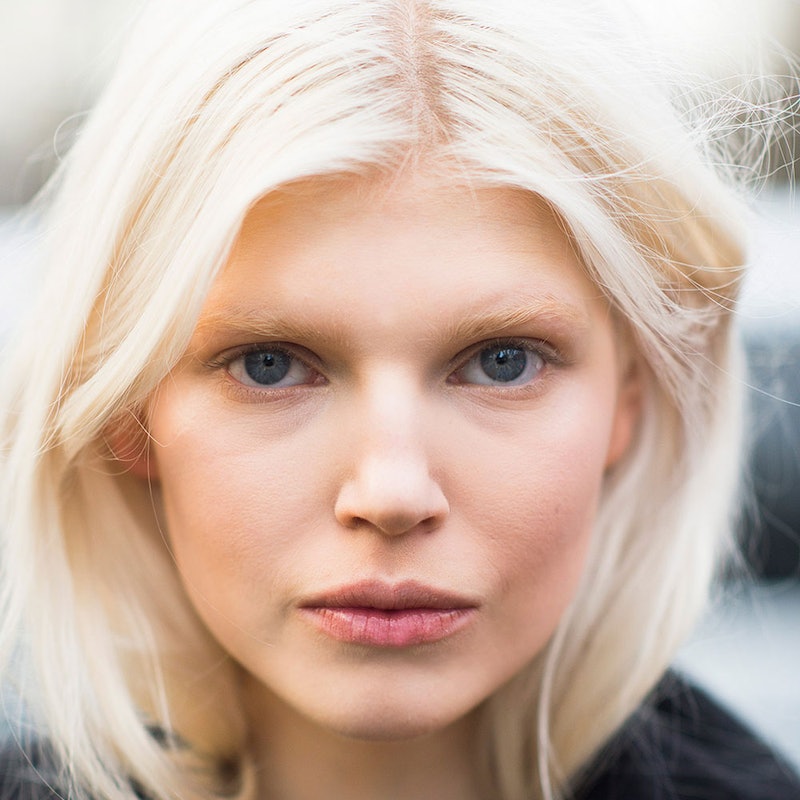 As someone who's experimented with hair color since before I was a teenager, going platinum was in the cards for me at one point or another. A total color chameleon, I've been several shades of blonde, brown, red and of course, ombré—I even had pink highlights in middle school, though by accident, I still rocked them. Lucky for me, I've been able to approach hair color with a bit of reckless abandon due to my extremely thick and coarse hair type.

Jump to the Fall 2014 collections when model muses like Ola Rudnicka, Sasha Luss and Devon Windsor hit the catwalks with stunningly white-blonde locks that I was instantly mesmerized by. With a three-shade fade painted on only a few weeks earlier, it proved irrelevant to me as I booked an appointment for an icy transformation with my stylist of several years, Lizzie Leigh at Whistle Salon. Almost immediately after reprimanding me for bringing her a nearly unachievable look, she agreed to lift my color little by little with a pale end-goal in mind.

Soon after two sessions of full highlights, we graduated to a double process, totaling four full-on bleach sessions until I was nearly platinum status. Over this nine-month period, I was brighter than I had ever been before, but not in the fair-haired way I wanted.

Disclaimer: This next part is highly unadvisable to anyone on the platinum track.

My reckless abandon hit a new high when I paid a visit to my colorist from college. During a double-process appointment (despite the fact I had just seen Lizzie a few weeks prior), said colorist managed to lift me to the snowy-haired shade I was hoping for. It was everything I wanted—icy, dramatic perfection—until it wasn't. A week or so later, my hair hit its literal breaking point as nearly half my hair split off within only a couple inches of my scalp.

Now dealing with extreme breakage and straw-like texture, I told my former colorist what happened, and she sent me a repair mask from Olaplex. The treatment was effective, but I needed more. Admitting my rebellious misfortune to Lizzie, she suggested I invest in an oil-based conditioner like the Masque Elixir Ultime by Kérastase. After only a few uses and a limited heat-styling routine, I saw a noticeable difference in my hair's texture, but I remained agitated with my limited styling options during the painfully slow regrowth process.

Adrian Wallace, a colorist at the Rita Hazan Salon in New York City, says that nurturing hair regrowth after breakage begins with how you wash it. "I like B3 Brazilian Bond Builder Color Care Shampoo—it's formulated with a technology that works to repair and rebuild the bonds of the hair with each wash," he says.

Kérastase artistic director Nina Dimachki says post-bleached hair should be washed every two to three days. "It's important to clean and wash your hair to remove dust and environmental damage," she explains. She also suggests sleeping with a hydrating treatment to deeply nourish dry or damaged strands.

Another point of contention was heat styling. Initially, I experimented (with little success) with far too many bobby pins and heat-free styles that turned out frizzy instead of sleek.

"A great alternative to daily heat styling is Brazilian Blowout treatment," says Wallace. "It results in less or no time with heat and less shampooing." For those who can’t give up heat styling entirely, Dimachki says to avoid styling products like mousses and texture sprays, to use a thermal protectant and to make sure styling tools never exceed 350 degrees.

Though I wish this experience had never happened, I did learn a lot of valuable lessons along the way. A few takeaway tips from the pros:

For those seeking platinum color, Dimachki says to ask yourself if going platinum is realistic for your natural color. Find out if your existing hair color will be a challenge to lift and share with your colorist every chemical service you've had (color, keratin, straightening) from the past one to two years for hair above the shoulders and two and a half to three-plus years if hair is shoulder-length or longer.

Wallace suggests a strand test to find out if going platinum is ideal for your existing hair color. This will help to determine if your hair type can handle such a light shade, which is especially important for fine or limp tresses. "Find out how many sessions it will take and, most importantly, ask your colorist if they use a bond builder," he adds.

While it's likely I won't stop coloring my hair until it's fully white by nature (fingers crossed), this experience has taught me the importance of understanding what's practical for my hair type and knowing how to properly manage my coloring whims in the future. My hair is thankful I'll be sticking with a more natural shade.