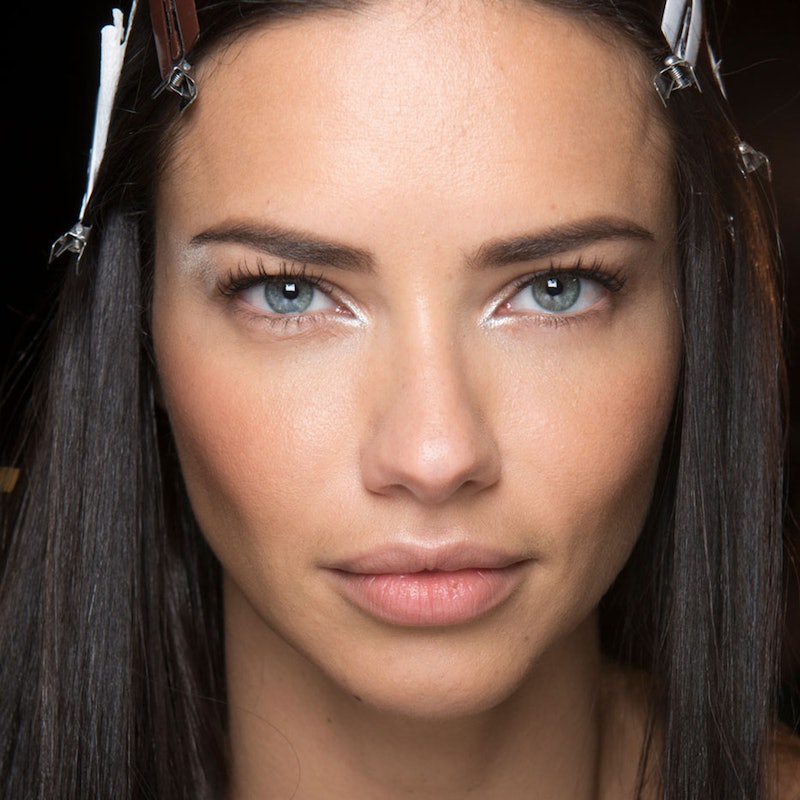 Along with showcasing the boldest beauty looks, fashion week runways are often the stage for exciting new product announcements. One makeup artist in particular, Pat McGrath, has successfully launched each of her namesake products by debuting them on the catwalk. Most recently, her Pat McGrath Labs Lust 004 glitter lip kit, first seen at Fall 2016 Atelier Versace, sold out in minutes. Prior to that, she launched a highlighter kit, a vivid eye-shadow palette and a captivating gold pigment. If there’s one thing we all know about Pat’s line by now, it’s shine, shine, shine.

That’s why when she took to Instagram to tease a new, unnamed product seen at Versace’s Spring 2017 show, we were quick to guess what it could be. In a series of mini clips, models Gigi Hadid, Adriana Lima and Naomi Campbell pose for the camera with bright silver pigment in their inner-eye corners. The metallic shade could be a hint that Pat’s releasing a sparkling eyeliner kit. Knowing her, we can expect many more Instagram hints as well as an official announcement in the coming weeks. Stay tuned.

Update 10/13: Pat has continued her streak of teasers across Instagram over the last few days. According to the images she may not be releasing a metallic eyeliner after all. We’re now predicting that #patmcgrathlabs005 will actually be a silver version of the gold pigment that was part of her iconic glitter lip kit launch. One image featured a set of lips donning the original gold pigment, followed by a set of lips with both gold and silver painted on. We’re keeping our fingers crossed that we’re right about this one, and that the pigments will come as a bundle—but only time will tell. In typical Pat fashion, we’re bound to find out on Instagram pretty soon.

Update: Pat finally revealed what her latest makeup launch will be. She’s relaunching her Gold 001 pigment along with three others as a quartet of metallics named Metalmorphosis005. Each color can be purchased as separate kits, and there is also a batch option including all four. Both the individual pigments and the set include the original powder formula, mixing liquid, a black dual-ended liquid liner marker, and a new cream pigment.

Metalmorphosis005 will be available starting at 12pm EST November 15th at www.patmcgrath.com; with national release on www.Sephora.com and in 7 select Sephora stores on Tuesday, November 22nd.