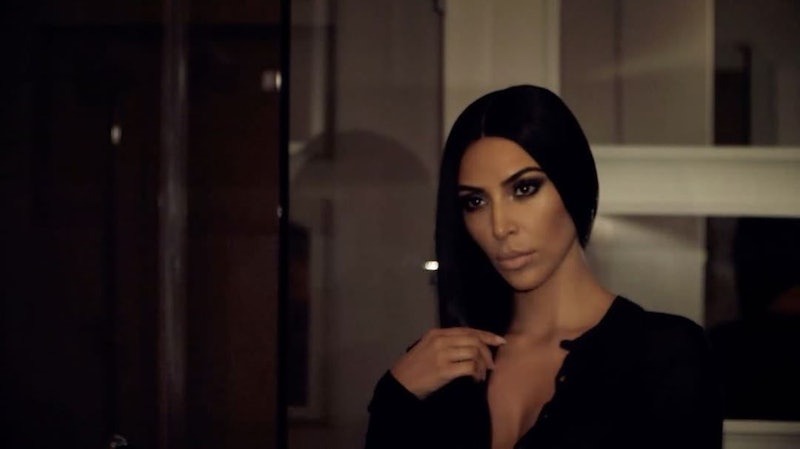 We recently shared that Kim Kardashian had a major beauty announcement in the works, and just hours later, it’s finally here. Legendary makeup artist Pat McGrath had previously announced Kim as her latest muse in a promo video of her newest product, the Dark Star 006 eye sets; she also teased us with peeks at the new product all throughout fashion month on the runways at Versace, Prada and Anna Sui, among others. Now, this video is giving us an even closer look. It’s part of Pat’s “In the Mirror” series, which has previously starred supermodel Naomi Campbell, It Girl Paloma Elsesser and model Jasmine Sanders; this iteration features Kim and husband Kanye West’s throwback track “Street Lights.”

In the video, Kim wears the Ultrasuede Brown version of the kit, a perfect smoky shade with the highest glitter content we’ve probably ever seen. With her eyes covered in a glistening eye shadow, Kim poses in front of a mirror while occasionally brushing her hair and touching up her brows and lip gloss. All the while, Kim and the shadow both look unreal—it’s really a feast for the eyes.

Dark Star will also be available in shades Ultraviolet Blue and Dark Matter—both of which include pigments, an eye gloss, blending brush and black kohl eyeliner. The products are slated to launch online April 11 on Pat McGrath’s site and April 22 on Sephora (and at select locations), with prices ranging from $95 to $130 each.

You can watch the video of Kim wearing Dark Star 006 below, and score the sets earlier than their release date via a pre-sale here.