It's not just candles anymore. 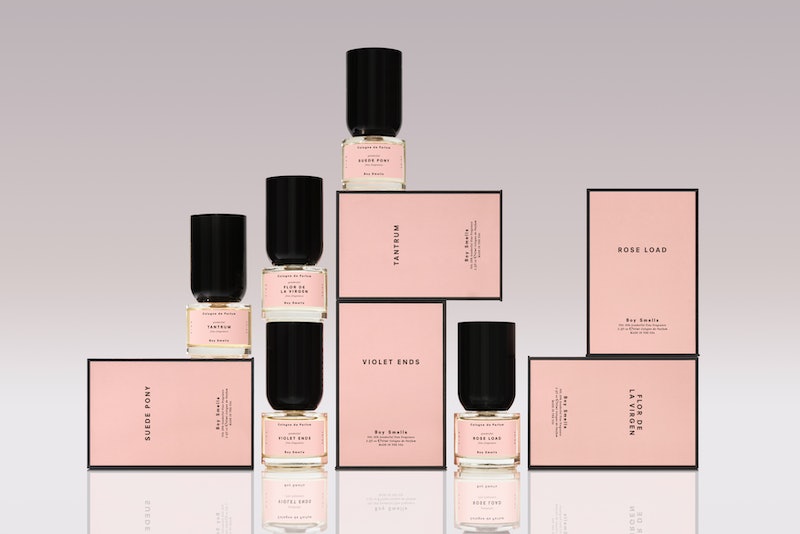 You can't think of Boy Smells candles without thinking about the brand's quirky, but already iconic name — and of course, its signature pink packaging. The two have always been an intentional play on the push and pull of the gender binary ... because why should scents be ascribed to a certain gender to begin with? Now, the brand, which considers itself "genderful" instead of "gender neutral," is branching out into the personal fragrance realm. Boy Smells' new fragrance collection goes by "Cologne de Parfum," in keeping with the brand's signature juxtaposition of masculine and feminine olfactive notes. The installment is launching with five fragrances (the same amount of candles the brand started with back in 2016).

"I love wearing floral scents, and all of my girlfriends love to wear, you know Tom Ford Tuscan Leather, or Le Labo Santal," co-founder Matthew Herman says in a phone interview with TZR, of his observations around fragrance prior to starting the company. "I was allowing myself to embrace new aspects of my personality through embracing these more traditionally feminine scents. And my girlfriends, right before they'd present to the CEO or the board, would be dousing themselves with a really manly cologne — so I could see that people were finding a lot of power in incorporating things that were on the other side of the binary into their identities."

To Herman, that experimentation and boundary-less-ness is what Boy Smells is all about: "Everybody should be able to decide what smells they like for themselves — and go against the ideas that are embedded in our social fabric around gender," he says. Herman and his partner in life and business, David Kien, have been working on the personal fragrance collection for two years.

"Personal fragrance is such an important part of personal identity — we're really excited to bring this 'genderful' view into, not only something you can burn, but now something that you can wear on your body," Herman says of the brand's new category. "Each step of your day, from the candle that you light next to your bed to the fragrance you spray on your body, should be really affirming moments that express the complexity of who you are." These scents, Herman believes, represent the "multiverse" of identities in the brand's growing community.

Of course, the vessel itself also needs to be discussed. The pink and black outer packaging is not so different than the boxes you're already used to seeing from the brand. As for the bottle, Herman explains it was inspired by neoclassicism. "The cap itself has a chalice shape at the bottom, but it's very tall and long, so it's actually kind of a combination of the phallus and the chalice — representative of the masculine and the feminine."

So — what exactly are the five 'genderful' fragrances? Below, Herman fills you in on each one.

Suede Pony is, according to Herman, "very comforting, but very rebellious at the same time." The rebellious element comes from the suede and brushed leather, while the soothing notes include hazelnut, coconut water, plum, and cardamom. At the base is labdanum, blonde woods, and a little bit of patchouli. "It's highly, highly sophisticated, but it's also a little bit bonkers," he says. "If I had read these scent notes on a fragrance before trying it, I wouldn't know if I'd like it, but it's one of my favorites!"

Herman calls Rose Load "a love letter to yourself." Rose, he explains, connotes the "sacred feminine," and this fragrance spotlights Turkish rose absolute and rose petals. The brand added raspberry blossom, too, which brightens the scent — Herman compares it to adding a little bit of "an acid to cooking." Finally, there's rhubarb, cardamom, and pink pepper at the top, which give it some "spice." At the base, there's papyrus, agarwood, and sandalwood. "This one really pulls that spectrum of masculine and feminine together beautifully," he says.

Violet, Herman notes, "is such a beautiful scent — but it usually has more feminine associations." In this fragrance, violet is at the heart, but it has black tea, tobacco leaf, incense, and orris in it, too. It also features a little bit of leather, some white birch — and bergamot and a little bit of pepper at the top. "It takes something very, very, very beautiful, and makes it very, very, very moody — and I think that we all have that spectrum in us," Herman says, "and we don't have to compartmentalize our sweet sides and our moodier, more introspective sides." In summary, it's described as "beautiful with an edge."

Tantrum, Herman says, is "explosively green." There's both green and black peppercorn, mint, galbanum, orris, and mate — and all these splintering textured wood notes like sandalwood, vetiver, Virginia cedarwood, and ambrox. The overall vibe is very spicy, and very green, but still very modern. "It's almost like a punk version of an Italian summer cologne," Herman says.

Finally, there's Flor De La Virgen, which Herman says "really, really leans into this 'genderful,' full-spectrum identity." It features juicy, fruity notes of pomello, lemon rind, and fig at the top, then, there's saffron, jasmine leaves, and ivy petals at the middle, and at the base, there are more "sacred, resinous notes," and "masculine musks," like cistus, olibanum, labdanum, clear musks, and ambrox.

Each fragrance is available in a 65ml glass bottle (larger than the industry standard) as of March 2 at BoySmells.com and in select retailers. Shop the new collection below: