We only recommend products we love and that we think you will, too. We may receive a portion of sales from products purchased from this article, which was written by our Commerce team.

By Caroline Goldstein
3.7.2021
The Zoe Report/Amazon 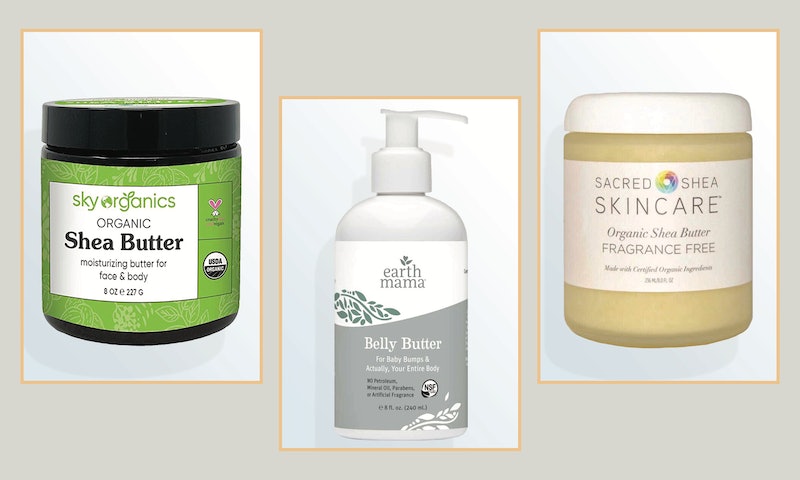 Body butters in their purest form don’t contain water, so their consistencies tend to be harder and waxier than creams or lotions. You’ll have to use some elbow grease to work them into your skin, though ideally, they’ll melt with your body heat. They also won’t absorb as readily as water-based moisturizers, so a bit of greasy residue is par for the course. There are a few, thinner body butters on this list, however, for those who prefer a more blendable consistency.

And here's a tip: Though body butters are, obviously, ideal for moisturizing your body, they're also equally beneficial for the ends of your hair, especially if they're dry or damaged. Don't apply these to your roots, however, otherwise you'll end up with oily, weighed-down hair.

Scroll on to shop the best body butters under $20, all of which have been certified organic.

Love it or hate it, Weleda Skin Food — that thick salve that can be used on everything from your dry elbows to your cheekbones — is an absolute classic. If you do kind of hate it (it can be overly rich for some), this Body Butter version might change your mind. Even though it’s billed as a butter, this is actually lighter and more absorbent than the original Skin Food moisturizer, and its soft, whipped consistency is super blendable — also a great choice if you’re not a fan of body butters that come in solid forms. But it’s equally capable of soothing very dry, flaky skin, thanks to its nourishing blend of shea butter, coconut butter, chamomile, and calendula.

A shea butter base in this Nourish Organic body butter is spiked with argan oil, a super-moisturizing ingredient that’s packed with antioxidants and fatty acids. The formula also contains coconut oil, sunflower oil, and vitamin E, which all work to further condition and protect your skin. This contains a subtle, organic fragrance, though it should still be suitable for people with sensitive skin. It also comes in a lovely, rose-infused formula.

This Sacred Shea body butter is super simple: A blend of raw shea butter, cocoa seed butter, and jojoba oil comprise the base, while organic rosemary extract and aloe vera round out the intensely nourishing formula. This receives excellent reviews on Amazon, too. Reviewers write that this “heavenly moisturizer” melts much more smoothly than other body butters they’ve tried, and since a little goes a long way, this big tub will last you a long time. When you run out of product, you can repurpose the glass jar.

If you’re serious about pursuing simplicity, add this Sky Organics shea butter to your cart. It contains just one ingredient: Raw, USDA-organic shea butter, which the brand says they source responsibly from family-owned farms in Ghana. Use it as a moisturizer for your skin and hair (Amazon reviewers confirm that it melts nicely), or for soothing bug bites and burns, hydrating new tattoos, or as a base for homemade cosmetics.

Unlike most other body butters that have to be scooped out of a jar, this Earth Mama Belly Butter comes housed in a convenient pump-top bottle, so it's both easier and more hygienic to apply. The consistency is more like a lotion than a body butter — the base consists of aloe leaf juice, olive oil, sunflower oil, then shea butter — so it dispenses easily without clogging the pump. This is marketed as a lotion for pregnant people, but of course you can use it as you’d use any other body butter, regardless of whether you’re expecting or not.

This Andalou Naturals body butter doesn’t bear the stamp of approval from an organization that monitors organic product labelling. But it does contain lots of organic ingredients, and it’s verified by the Non-GMO Project, which certifies that the formula is free of genetically modified organisms. It’s also a great choice if you prefer a lotion with a thinner consistency, and appreciate the tidiness of squeeze-tube packaging. The formula contains a greatest-hits list of fatty acid-packed oils (including argan and evening primrose oils), as well as several antioxidant-rich botanical extracts. Choose from three delicious scents: cocoa, rose, or lavender.