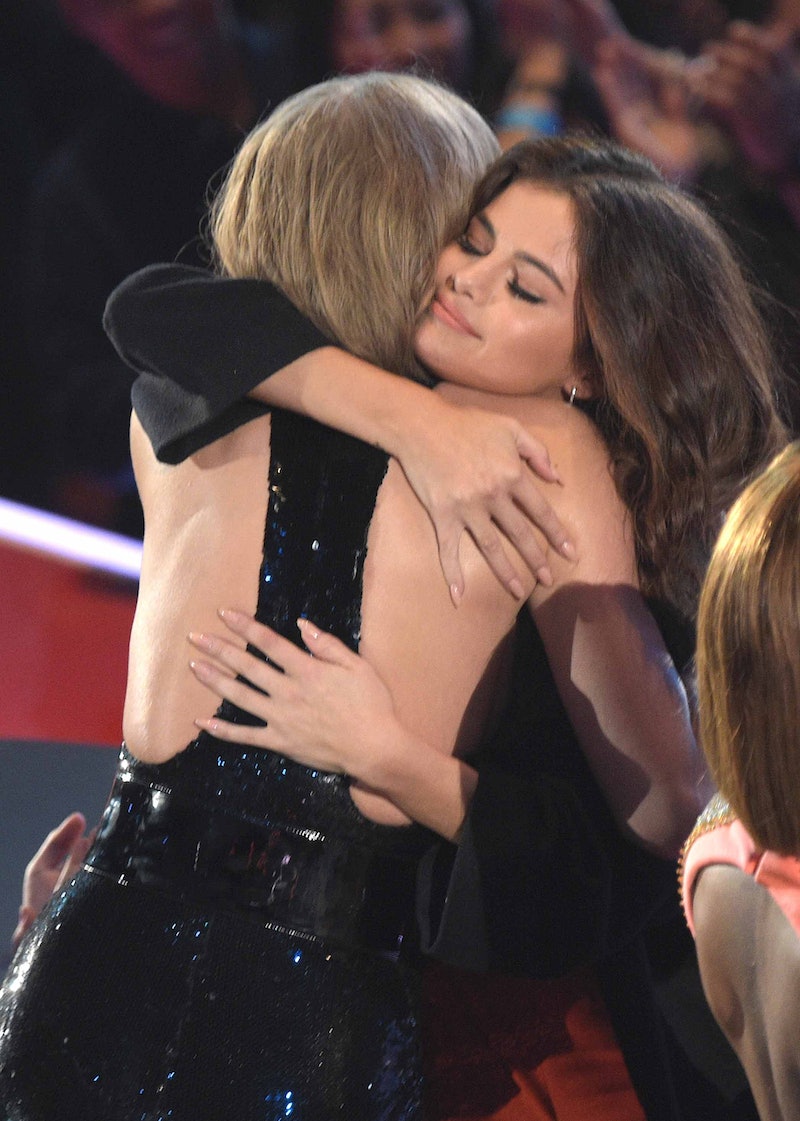 If you thought awards season was over, and you were feeling a bit bummed about it, this weekend definitely proved there’s still some steam left in 2016’s statuette game. The GLAAD Awards took place on Saturday night, and the American Country Music Awards, the Juno Awards, and the iHeart Radio Music Awards followed on Sunday. Though Taylor Swift stole the show on Saturday when she showed up as a surprise GLAAD Awards presenter, she basically was the show at the iHeart Radio Music Awards, where she took home wins for Album of the Year, Female Artist of the Year, Best Tour, Most Thumbed Up Artist of the Year, and Best Meme-able Moment. Click through to see the Taylor-centric event’s most notable looks, speeches, memes–many of which unwittingly involved Swift as well–performances, and more.

Well, sort of. While introducing Taylor Swift as this year's recipient of the Best Tour award, Timberlake made a Donald Trump joke, saying "Some people are trying to build walls. Taylor Swift is choosing to tear them down." He then clarified that he was making a political joke before calling his audience out on being too young to vote. To close, he mentioned how nervous he had been as a new dad when he performed in Los Angeles as a guest star on Taylor's tour, punctuating his point by saying "#poopydiapers." (Which, we must say, was a moment our 2002, Justified-era selves never imagined.) Watch his full speech here.

Or at least it seems he did, if the reactions of the screaming girls surrounding the stage while he performed "Love Yourself" and "Company" were any indication. Further inciting a riot, Bieber went so far as to dance with one of his fans mid-performance. Watch it here.

Demi Lovato Blew Us Away

Can you believe that many, many generations of people had to live without Taylor Swift in their lives? Making this face while her boyfriend Calvin Harris accepted an award? Sigh.

Afterwards, while accepting her award for Best Tour, Taylor gave Harris a shoutout for being an "amazing person to come home to when the crowds were all gone and the spotlight went out." Could these two be any sweeter?

She Also Backed Her Bestie... Maybe

It seems likely that Taylor is not a fan of the possibility that her bestie Selena Gomez might be rekindling things with ex Justin Bieber, if her reaction to his performance serves as any kind of clue. Watch it in all its awkwardness here.

Tay's approval--or lack thereof--didn't stop Gomez from giving Bieber a standing ovation later in the night, a moment which was covertly captured on film by a fan. See it here.

Then, She Hinted At Something Major

During her acceptance speech for Album of the Year, Swift noted that this would be her last awards show "for a while." This likely just means she's wrapping up the huge year she's had with 1989 to focus on new projects; however, with Taylor, you never know what to expect next, and we'll be waiting with baited breath to find out.