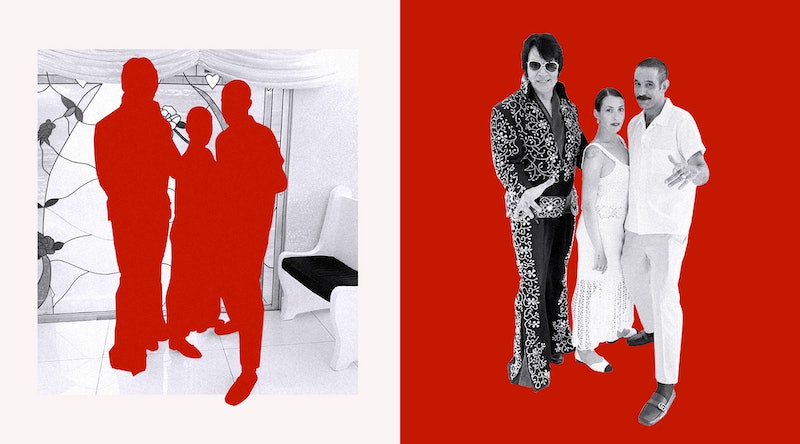 It seems 2020 has manifested two different types of people. Those who got married this year and those who did not. Industry research company The Wedding Report reported a nearly 50% loss in weddings this year, with 41.5% postponed to 2021 and 7% canceled altogether. But what about those who fell into the former half and chose to say, "I do" — pandemic be damned? Yes, amidst the virtual ceremonies and super small nuptials sits another category of COVID weddings: The spontaneous elopement. And, for Kat Typaldos, this proved to be simply the best way to go... especially since Elvis was involved.

As it turns it out, the LA-based stylist and creative consultant got engaged and married within a matter of days while on a cross-country road trip from New York to LA this past summer. Typaldos and her now husband, woodworker Ronnie Campone, had both decided to pack up and uproot their East Coast lives to embark on a new chapter together in California. And right before they hit the road, the fashion expert decided to up the ante on this major transition. "In quarantine, the things I valued became so apparent," she explains to TZR. "I thought about how lucky and grateful I was for this person in my life. I felt cozy and protected and at ease with him. I also just really like him as a human. So, as we were getting ready to leave New York, I was like, 'I think I need to propose to this person.'"

Admittedly one who has always prioritized work and career, it should be noted that Typaldos is not one to jump into romantic decisions or relationships quickly. She had actually known Campone (whom she refers to as her "Italian stallion") for years, as they shared mutual friends, before finally going on a date with him. "Before him, I had been single for a decade," explains Typaldos. "I'd dated people and had boyfriends, but I hadn't had anything longer than like six months [in that period of time]. But I believe deeply in love, and I wanted somebody who wasn't scared of my intensity. He had his own thing going on, so when we got together it felt really thoughtful and mindful."

And, although the couple had cohabited in NYC for two years prior to their big move, neither one felt rushed to make it official, so to speak. "We had talked about marriage before, but kind of abstract," says Typaldos. "We talked about our commitment to one another like, 'Yes, we are going to build a life together.' But, I never really thought I wanted marriage and he was on the fence because he had been married before. [...] I think maybe we were more scared off by [the idea of] weddings and the stress level involved."

But with social distancing and COVID-induced quarantine orders in full swing, the very notion of elaborate nuptials was officially off the table, and the idea of marriage became not only more appealing, but a natural next step. "Throughout the trip, in my mind, I was formulating and understanding why I loved this person so much," she says to TZR.

While en route, Typaldos reached out to a jewelry designer friend to create and expedite a ring. "I said, 'Hey, I know this is crazy, but I think your rings are perfect for Ronnie. Can you make me one and mail it to me on my road trip?'" she recalls, adding that she also reached out to their respective families to get their blessing. "I texted his mom and just said, 'I love your son and this makes sense to me so I think I'm going to do this on our road trip.'"

But as their journey took them closer and closer to California, the ring had yet to arrive. Unable to wait anymore, Typaldos ran into a gas station on one of their many stops and picked up a few options that might do the job. "I bought like a Ring Pop and a mood ring, all while he's in the bathroom," she says laughing.

With her proposal centerpiece taken care of, the stylist was now tasked with figuring out the perfect place to pop the question. "We got to Arizona, and we're at the Grand Canyon, and I'm like, 'Sh*t, this would be perfect,'" Typaldos says. "There weren't many tourists there and it was a beautiful setting." But, even still, the moment still didn't feel private enough and simply wasn't right. It was only after their day of sightseeing, when the two returned to the glamping site they were settling into for the night, that things fell into place. "We got back to our little bungalow and, I got down on both knees in my vintage Gap maxi dress and he just looked at me and asked, 'Are you proposing?'"

She certainly was. "I wanted to be very forthright about what he meant to me," she says. "In the actual moment, I got very tongue-tied and just said, 'You are my person,'" she recalls. As it turned out, the stylist wasn't the only one with marriage in mind. Earlier that day, Campone had snuck away to a roadside gift stand and snagged a ring to ask her the same question, in a move that can only be described as kismet. Or, as Typaldos likes to call it, a DP: "double proposal!"

With their final stop before hitting California being Sin City, the next step also felt like a no-brainer. "We were like, 'F*ck it, let's do it in Vegas," laughs Typaldos as she recalls the giddy moment. "We started Googling chapels, and definitely wanted Elvis to do it." Following in the footsteps of Britney Spears, Michael Jordan, and Judy Garland (to name a few), the couple settled on the notorious Little White Wedding Chapel.

And while most patrons of the drive-thru venue opt for whatever outfit couples find themselves in at the moment (read: Spears' distressed jeans and cropped t-shirt for her 2004 ceremony), Typaldos opted for something a bit more apropos for the occasion. "I weirdly had a perfect outfit," she says of her wedding day ensemble. "I had this vintage lace dress and went to Chanel and got a pair of flats. I then picked up some Wet N' Wild lipstick and lip liner from CVS. Ronnie got a pair of Gucci loafers, and we did it."

Typaldos walked down the aisle while the Elvis-impersonating officiant crooned the classic "I Can't Help Falling In Love" and the shotgun ceremony concluded appropriately with a dance party to "Hunka Hunka Burnin' Love." The next day, the newlyweds ascended into Los Angeles to begin their new chapter (in every sense of the word), tying up the entire experience perfectly.

And while Typaldos says she has every intention on planning a "rager" in 2021 to celebrate their spontaneous marriage with those who were not in attendance (mainly, everyone), she has no regrets or qualms about her two-day engagement and Sin City wedding. In fact, she wouldn't have had it any other way.

"I have all these different templates for marriage and weddings and just kind of renegotiated what that means for us," explains Typaldos. "I think you can deter from those templates and figure out what works. It all felt very impulsive, but something also really clicked. I just wanted to share this moment with him." And Elvis, of course.