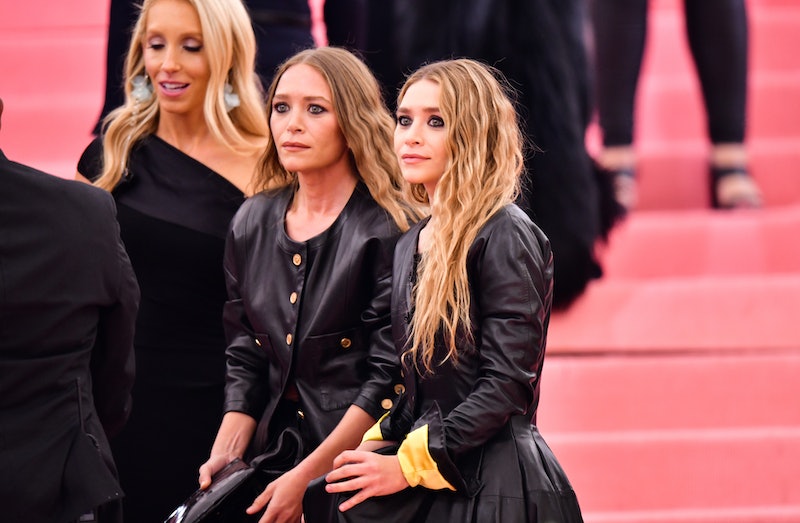 In a perfect world, today would be an exceptional, albeit hectic one. As the first Monday of the month, May 4 would've had the fashion world abuzz with Met Gala 2020 anticipation. Style editors and writers would be taking guesses on who would hit this year's theme, "About Time: Fashion and Duration," right on the money. And, despite the sad cancellation due to COVID-19, it's safe to assume two style juggernauts would be ones to watch, as they are every year on the Met Gala red carpet: Ashley and Mary-Kate Olsen.

The now-seasoned designers have been mainstays of the event for some 15 years now, and have evolved on the carpet like a fine wine — they just get better with time. And while their looks may not be the spectacles of their entertainment counterparts (here's looking at you, Lady Gaga and house of Kardashian/Jenner), they are equally genius in that they're still discussed and revisited each year.

According to the Olsen's longtime hair stylist, Mark Townsend, the magic can be found in their authentic approach. "They dress themselves," he explains. "There's no stylist, no publicist, no borrowed jewelry, none of that. They start prepping for Met months and months beforehand. And they do almost all of their shopping at a vintage shop in Los Angeles called Lily et Cie, owned by Rita Watnick." This explains the timeless yet unexpected gowns that have served as a veritable feast for the eyes year after year: Ashley's off-the-shoulder vintage Dior in 2011, Mary-Kate's vintage Chanel and Balmain coupling in 2013, their contrasting takes on Diane von Furstenberg in 2008, etc.

Equally reliable have been the beauty looks served over the course of 15 years. While the two tend to stick firmly to their signature laissez faire approach to hair and makeup, they definitely allow for some upgrades for the first Monday in May, says Townsend. "Mary-Kate has a very strict rule that I'm only allowed to use five hairpins or less for an updo because she feels if we need more than five we've thought about it too much and it's too done," explains the celebrity hairstylist (who also counts Dakota Johnson and Rachel Weisz as clients). "But for Met Gala, there's no rules. I can do anything." This unrestricted take has led to some truly interesting fashion and beauty moments including Ashley's spontaneously cut asymmetrical long bob in 2009, Mary-Kate's coin-clad mane 2017, and their matching crimped hair looks in 2019.

Whatever mystical cocktail they have to thank for their continuously remarkable looks each year, it's no secret Ashley and Mary-Kate are two of the most anticipated and fascinating attendees to look for on the Met red carpet each year. To help soften the blow of this year's cancellation, ahead, an insider's peek into some of the designers' best moments since their Met Gala debut in 2005, straight from Townsend himself.

In hindsight, the Olsen's Met Gala debut foreshadowed what would come in following years: lots of vintage and undone waves.

This marked the year The Row founders appeared in the spring ad campaign for Badgley Mischka. Appropriately, they dressed the part for the Met Gala. "That was probably one of my favorite updos on Ashley," says Townsend. "It was swept over and a low bun in the back. That was the year we discovered dry shampoo."

"Ashley went for Grecian goddess vibes this year," says Townsend. "This was also the year they shopped at Rita Watnick's vintage shop for the first time."

"They both wore Diane von Furstenberg," recalls Townsend. "Ashley was inspired by '80s supermodels like Stephanie Seymour and Cindy Crawford. I gave her a roller set to give her some lift and then flat-ironed the ends so it was straight but still full with a ton of volume."

"This is my favorite Ashley Met ball look, ever," says Townsend. "We literally debuted her haircut at the Met Gala. She asked me to come over and trim her hair like three or four weeks before. She said, 'I think I want a change,' and I just started cutting. We were like 'let's go shorter,' 'let's make it asymmetrical.'" The result? A shaggy, asymmetrical bob that complemented her pristine white column dress from The Row.

"That year, Mary-Kate wore Givenchy," recalls Townsend. "The inspiration was California surf-girl look — like a beach wave that looks more natural. We did her typical waves that I've done a million times, but once she got dressed with all her jewelry and makeup on, Mary-Kate asked, 'Is this just too curly?' I grabbed a flat-iron and ran it really quickly through the waves so they turned a bit more flat and less defined. Then, we brushed them out and created the most magical texture."

"One thing with Mary-Kate is there's always some kind of braid in her hair," explains Townsend. "I always want her hair to look like a painting. This was the year I decided to use hair extensions to create long braids on her."

"Ashley wore a vintage Chanel gown from the year she was born [1986]," says Townsend. "We were discussing ways to make it fresh and cool. I thought about a low ponytail, and Ashley added, 'What about a ribbon in the hair?' I was able to match the color of the dress so well!"

"Talk about starting some trends," says Townsend with a laugh, referring to Ashley's half-up top knot. "We ended up seeing that everywhere. We used only gold bobby pins and it was Ashley's idea to keep them showing."

For Mary-Kate's chained hairstyle, Townsend recalls he spent some 20 minutes in the mirror with the designer strategizing where to place each strand to perfectly frame her face. "That's our gypsy moment," he says.

"Style-wise, all we ever use is salt water and dry shampoo on their hair," says Townsend, who says he'll use an entire bottle in one sitting when styling Ashley and Mary-Kate for the Met Gala.

Overall, Townsend says this cohesive vintage Chanel moment is his favorite of all time. "When they sent me photos of their black leather dresses, my mind blew up," says Townsend. "I showed them images of the Wonder Twins, who were huge in the clubs in NYC in the '80s. So we went in with a plan that they would have the same hair."

Townsend took a wave iron to the Olsen's manes and created matching crimped looks for both that felt more funky and modern than outdated and campy (despite being the actual Met Gala theme that year).